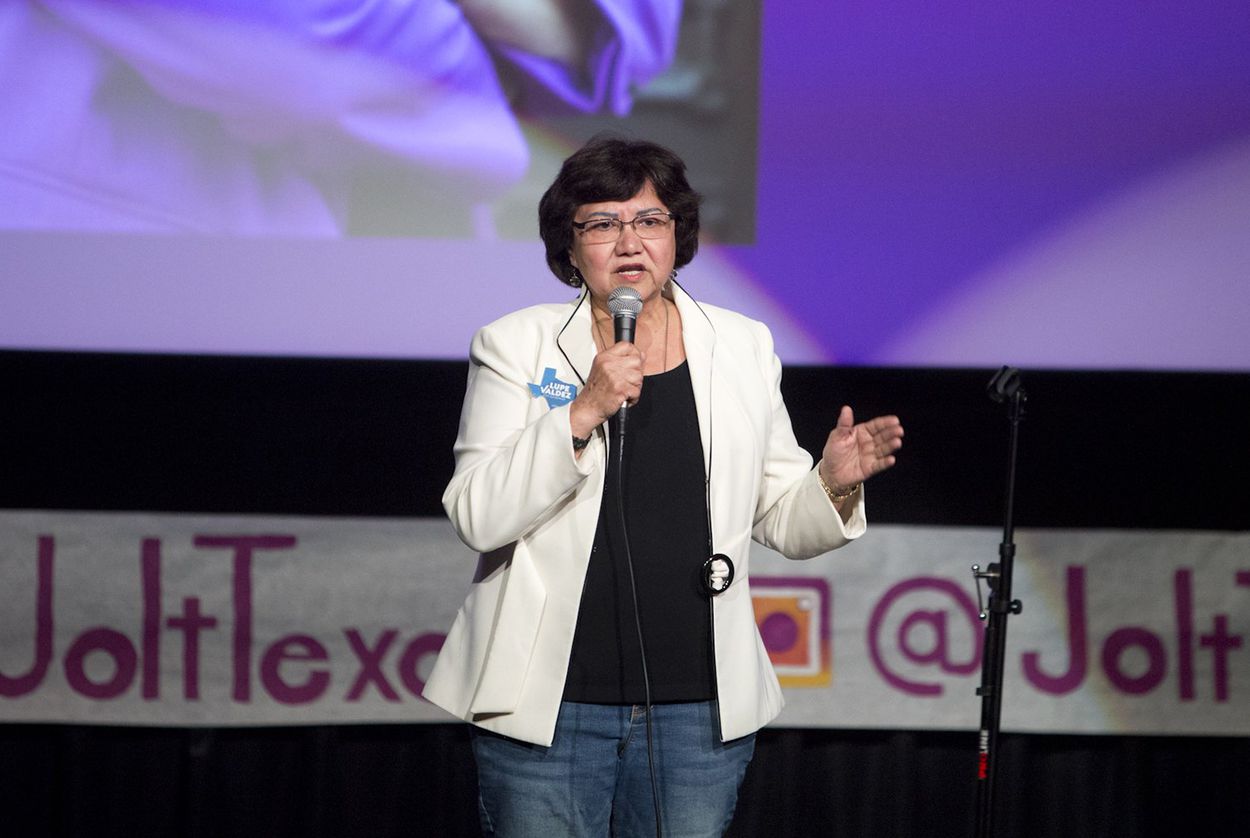 Karla Quiñones did not mince words as she asked the first question to Democratic gubernatorial candidate Lupe Valdez.

“Ms. Valdez, you were sheriff of Dallas County for many years, and it seems that your legacy was one of supporting anti-immigrant policies that actually expanded ICE enforcement,” said Quiñones, a Dallas high school student, posing a series of pointed questions about Valdez’s cooperation with the federal agency and her intentions if elected governor. “Why should we trust you today?”

The less-than-direct answer that followed from Valdez did not appear to satisfy Quiñones and the group she represents — Jolt Texas, which was created last year to mobilize young Latinos in turning the state blue. And before the end of the afternoon, Valdez had lost another endorsement to her runoff rival, Democrat Andrew White, after coming across as ill-prepared or -informed.

Jolt had convened four Democratic statewide candidates for a town hall Sunday morning in Austin, and Valdez was not the only one who faced tough questions about his or her record. White, the son of late Gov. Mark White, was asked twice about a “border security company” he owns, and U.S. Senate hopeful Beto O’Rourke was pressed on his commitment to LGBT rights.

But it was Valdez’s appearance that raised the most eyebrows, prompting Jolt to endorse White and deliver a blow to a candidate whom many Democrats have hoped would galvanize the Latino vote in November.

In her answer to Quiñones’ question, Valdez insisted she would fight for the immigrant community but partially skirted the specific issues the student had raised with her tenure as Dallas County sheriff.

“Of course — look at me,” Valdez said. “I’m going to fight for as much immigration as I can, but immigration is a federal issue and there are certain things that we have to do. Unfortunately what she was discussing were several things that were quite misunderstood.”

Valdez went on to tout her opposition to the state’s “sanctuary cities” ban last year as well as her support for immigration reform that includes a path to citizenship for people in the country illegally. At the end of her answer, she addressed something mentioned by Quiñones — a community walkout at a meeting she held with federal immigration authorities — downplaying it as a “couple people that were upset because I couldn’t explain to them what was going on.”

Jolt seemed almost instantly dissatisfied with Valdez’s overall answer, tweeting minutes later that it would have liked to see Valdez “go more in detail on her Dallas county record.” White, who is running against Valdez to challenge Republican Gov. Greg Abbott, also voiced disappointment with Valdez’s answer, telling reporters afterward that she “needs to answer those questions and today she didn’t really answers those questions — she put it off.”

“The young lady who asked that question deserves a real answer,” White said of Quiñones. “We haven’t gotten an answer.”

Valdez initially declined to discuss the topic at any length with a swarm of reporters who sought to ask her about it as she left the auditorium where the event had been held. When she eventually made herself available to the media in the lobby, Valdez said there was a “misunderstanding” of her record as portrayed by Quiñones. As for why the Latino community should trust her, she again pointed to her opposition to the “sanctuary cities” law — Senate Bill 4 — noting she “went to fight SB 4 before anybody else showed up.”

After fielding questions from reporters for about three minutes, Valdez made clear she was done, flashing some frustration.

“OK, I’ve given you your answers,” Valdez told reporters. “You wanted some answers. I’ve given them to you, OK? Now let us do what we love to do best and [talk to] some of the voters and go on to the other things we have to do, OK?”

To be sure, White did not escape scrutiny at the town hall either. He initially got a multi-part question on immigration  that alluded to his “border security business” — a reference to Geovox Security Inc., a company he owns that uses heartbeat-detection technology to find people hiding in vehicles. White did not address the topic in his response to that question, which was from Emily Pinal, president of the Jolt chapter at the University of Texas at Tyler. So the group asked it again later.

White had an answer ready on the second go-around, explaining that Geovox’s technology is put to use on the U.S. border and in other countries “to make sure that sex trafficking is not happening, to make sure that if there are people in the back of that truck, they’re not dying from heat exhaustion or dehydration.” White characterized it as a “smart security” that stands in contrast with Republican efforts to secure the border, which most recently included ratcheting up the National Guard presence there at the direction of President Donald Trump.

“It’s a perfect example, in my opinion, of the type of leadership I want to bring to the border, which is yeah, we need a secure border, for sure, it’s our sovereign right, but we should have a smart border, not a fear-mongering border,” White said. “I’m sure this issue might be used against me — that I have a quote ‘border security business’ — but the reality is it’s used to protect people’s lives, and frankly I’m very proud of the fact that in the 20-something-year history that we’ve had, we have saved thousands of lives with this technology.”

O’Rourke — who is challenging U.S. Sen. Ted Cruz, R-Texas — also felt some heat when it was his turn to be questioned. Marco Mejia, president of Jolt’s chapter at the University of Texas at El Paso, asked O’Rourke, an El Paso congressman, how he plans to fight for the LGBT community, noting that many politicians hold themselves out as allies of the community but “do little to prove it.”

“You kind of issued a challenge there — you said, ‘It’s one thing to talk the talk, but can you walk it as well?'” O’Rourke replied before going on to list numerous pro-LGBT proposals he has been involved in, dating back to his days on El Paso’s city council, when he led a fight for same-sex benefits for city employees.

Disclosure: The University of Texas at El Paso has been a financial supporter of The Texas Tribune, a nonprofit, nonpartisan news organization that is funded in part by donations from members, foundations and corporate sponsors. Financial supporters play no role in the Tribune’s journalism. Find a complete list of them here.