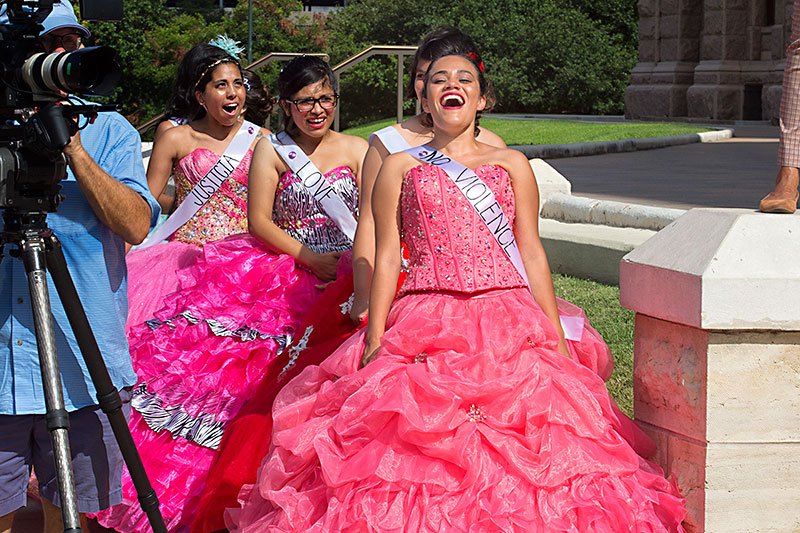 g Latina women chose an unlikely spot to hold their quinceañera – a significant tradition marking a Latina’s transition to adulthood. For them, the point wasn’t to revel in the festivities, but to send a serious message to lawmakers: Texas is our home, and we’re not going to back down, no matter how hard you try to push us away.

“We are here to take a stand against Senate Bill 4, the most discriminatory and hateful law in recent history,” said 17-year-old Magdalena Juarez, to cheers and applause. “When Governor Greg Abbott signed the bill into law on May 7, he disrespected my community. He put a lot of Texans in danger. SB 4 is not only an attack on immigrant communities, it threatens the lives of all people of color. It makes simply being brown illegal.”

The law punishing so-called “sanctuary cities” allows police officers to inquire about the citizenship status of anyone they pull over, and forces local law enforcement to comply with (currently voluntary) U.S. Immigration and Customs Enforcement detainer requests. Barring a court injunction in the next two days, the “papers please”-style law will go into effect on Friday, Sept. 1.* (SB 4 was blocked in courts late Wednesday; see update at end of article.) But while SB 4 has instilled fear and anxiety in the local immigrant community (“Into the Shadows,” July 21), it’s also served as a rallying cry to galvanize Latinos and prompt creative acts of resistance. The latest radical act, the quince protest – which drew national attention and attracted millions of online viewers – is the brainchild of Jolt, a scrappy new organization with big ambition.

Working out of a compact office in East Austin, Jolt seeks to mobilize the Latino vote, build community and cultural pride, and drive an issue-based agenda. It wasn’t yet ready for prime time when it launched in November (the group didn’t even have an office until February), but the election of Donald Trump – and his demonization of immigrant Mexicans as criminals and rapists and his calls for a border wall – forced the group into early action. In fact, Jolt planned to slowly roll out with a completely different priority agenda focused first on educational issues, with the assumption their chance for immigration reform would be feasible with a Hillary Clinton presidency. But the surprise election results swung the focal point to racial justice and immigration. Women lead the small staff, comprised of two full-time and three part-time workers, with Cristina Tzintzún at the helm.

Growing up in Ohio as the daughter of a darker-skinned Mexican immigrant mother and a white “American hippie” father, Tzin­tzún saw the striking differences between how she and her siblings were treated when they’d go out with her mother vs. her father. “The privilege of growing up in the U.S. also came with great responsibility of addressing the inequities we saw,” she said.

Tzintzún moved to Austin when she was 21. Three years later, she co-founded the Workers Defense Project, and grew the immigrant rights organization from a modest operation to a nationally recognized institution within 12 years. It was at WDP that she learned how to take victories in a state deeply hostile to her cause. Among helping pass numerous city ordinances and state laws to better protect immigrant workers, in 2006 Tzintzún spearheaded one of the largest marches in Austin history at the time. “A bunch of people told me I was crazy and was not going to achieve anything,” said Tzintzún. “And now [WDP] has become one of the most pronounced social justice organizations in the state.”

Toward the end of her tenure there, Tzintzún had developed a few important takeaways: that “to really win immigration reform, to win full equality for Latinos, we also need to build and consolidate our power electorally if we want to actually enact change long-term.” She left WDP in 2015 for a brief stint at the Service Employ­ees International Union in D.C. to figure out how to do just that. Missing Texas “desperately” and realizing power comes from the states, she soon after returned to Austin, energized to begin her next venture.

Jolt intentionally began during an off-election year with the intent to grow a base that could mobilize and sustain voters in time for the 2018 election. They’ve set up staff in key metro areas (Jolt is currently expanding into Dallas) and recently launched a digital tool kit; the rollout of high school and college chapters; and a young adult union, allowing participants to aggregate power across the state much more quickly. While finances pose a challenge for the nascent nonprofit, it’s raised $280,000 to date. (Tzintzún is an unpaid volunteer who generates income through consulting work.) Jolt claims more than 200 all-Latino members in Austin and 15,000 statewide, who range from fifth-generation Texans to the undocumented. The organization isn’t just interested in drawing people to politics, but in sharing Latino culture, music, and art – a characteristic that distinguishes it from other groups with similar goals. A Capitol youth rally planned for Sept. 1 will feature “lucha libre” wrestlers who will “fight for justice and equality” while a hairdresser buzzes symbols like a clasped fist of solidarity into folks’ hair, if willing.

Given that Latinos tend to lean Democratic, encouraging party votes is just half of Jolt’s battle. “It’s not enough to say the other side is terrible so come to our side, which is what I think we’ve historically done,” said Tzintzún. “We know Republicans aren’t on our team, but the Democratic Party also needs to do more. They haven’t always been our allies on immigration. So while we do think Texas will change eventually, for us it’s not just a question of which party is in charge; we need to invest in Latino leadership so that they can drive their own issue agenda to address the real inequities we face as a community.”

Jolt is far from the first group to set its sights on turning Texas blue. Most recently, in 2013, the Obama-affiliated Battleground Texas sought to make Texas a competitive swing state by knocking on doors, registering voters, and deputizing volunteers to boost Democratic Party voting among minorities and white women. However, enmeshing itself with Wendy Davis’ 2014 bid for governor, which suffered defeat to Gov. Greg Abbott by 20 points – seven points worse than previous contender Bill White ­– led to high-profile criticism and reports of strained relationships with some of the state’s Democratic candidates. Faulty and exaggerated early voting turnout memos, a late-term investment in training Latino leaders, and the out-of-state team’s initial ignorance in navigating Texas’ voter laws didn’t help either. 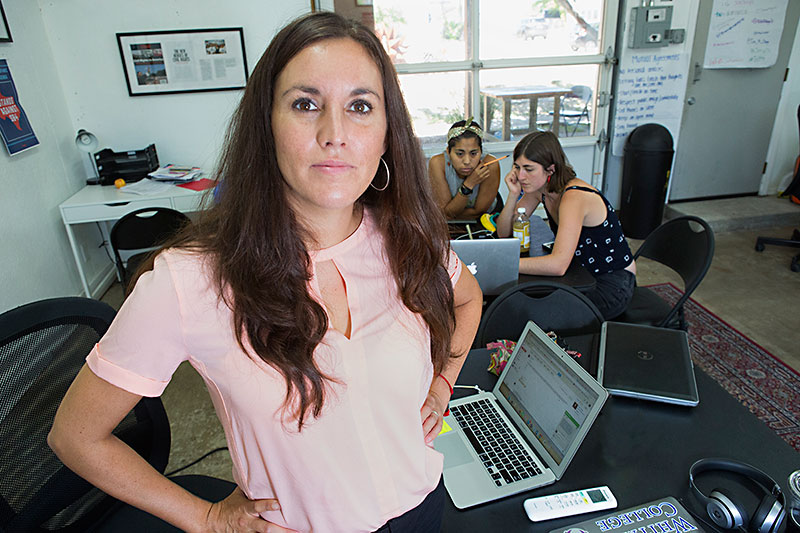 Without specifically calling out Battle­ground or any other group, Tzintzún maintains that Jolt’s strategy is unique to previous attempts in that it’s heavily focused on Latino youth, with the belief young citizens are entirely capable of self-organizing throughout the year. Latinos currently comprise nearly 50% of Texans under 19 years old, and one-third of Hispanic eligible voters in Texas are between 18-29 years old: That’s potential for a sizable army. And Attorney General Ken Paxton’s attack on “DREAMers,” or recipients of DACA, the Deferred Action for Child­­hood Arrivals two-year work and study program (of which Tzintzún’s husband counts himself) that protects young undocumented residents, has revved up activism as well. Paxton has taken an even harsher approach to DACA than extremist President Trump – and has threatened to sue the president if he doesn’t rescind the program – a prime example of the state’s harsh anti-immigrant fervor.

Texas demographic trends, generally, are also on their side. Over the next three years, Hispanics are on track to constitute a plurality of the population – at least 43% by 2020 – according to Latino Decisions, a political opinion research firm. In Travis County alone, the Hispanic population jumped 16% from 2010 to 2015, U.S. Census figures show. But it’s not about sheer numbers for Jolt; Tzintzún said demographics alone won’t “determine our destiny. … Real organizing needs to happen. And what better place than Texas, today’s ground zero for the fight for immigrant and Latino rights.”

That mobilization starts with voter registration and increasing turnout among the 4.8 million eligible Latino voters, an uphill battle in a state that has sought to block minority voting through redistricting and racist voter ID laws, openly deemed “discriminatory” by a federal judge. (The past few weeks have been busy on that front. See “Voter IDon’t,” Sept. 1.)

Latinos currently make up 38% of the state’s population, but they’ve historically voted at lower rates than non-Latinos and their counterparts in other states. Sylvia Man­zano, a Texas-based consultant with Lati­no Decisions, attributes the struggle to mobilize Latino voters to lopsided and noncompetitive races, as well as the lack of engagement from parties and campaigns. The number of registered Latinos who cast a ballot in Texas increased slightly from 47.2% in the 2012 presidential race to 49.8% in 2016 – still well below the more than 60% of non-Latino voters who went to polls both cycles. “There’s certainly more work to be done, especially just in registering voters, which is a costly endeavor in Texas,” said Manzano. “Since political parties are more focused on winning elections, the job really falls on the shoulders of nonprofits.”

On a hopeful note, Austin political consultant Steven Rivas said he’s heartened by recent local Latino mobilization, and the induction of Latino representation on the 10-1 City Council. “The result of the 2016 election, with its hints of discrimination, has ramped up organizing,” said Rivas. “What I’m seeing in every neighborhood on the Eastside is unprecedented. I think there’s a wave of Latinos that are ready to take action and not expect the status quo to elicit change.”

With hopes that former San Antonio mayor and HUD secretary Julián Castro would shake things up statewide mostly dashed, eyes are on his brother Joaquín, a sitting U.S. representative who is being encouraged to jump into the 2018 gubernatorial race by Dem leadership. However, there’s an overall lack of enthusiasm from Democrats to get on the statewide ticket. Even if there comes a Castro run, Manzano suggests it’s actually more effective to not attach Latino voters to individual candidates, but rather to lasting agendas. “To think some deus ex machina is going to arrive is really wishful thinking that may or may not ever happen,” she said. “It’s more likely that a more enduring electorate would be one that has specific issues that matter to them and affect their everyday life as opposed to a particular candidate.”

Immigration tops the list, according to Latino Decisions’ polling of Hispanic Tex­ans. Staring in the face of SB 4, a threat to not just the undocumented but to all Latinos who can now be racially profiled and discriminated against because of the color of their skin, Tzintzún believes the issue has reinvigorated Latino activism. “For us, SB 4 is really a call to action to defend our community from a hateful, discriminatory agenda,” said Tzintzún.

Back at the Capitol, the quince girls pumped their fists in the air in a choreographed dance to a “mash-up” version of Hamilton playwright Lin-Manuel Miranda’s “Immigrants (We Get the Job Done)” and “Somos Mas Americanos” by Los Tigres del Norte. Instead of dancing the night away with friends and family, the young ladies shuffled into the Capitol to convince lawmakers to put an end to SB 4. Alexandra Lopez, decked out in pink sparkles that belied her somber speech, slammed the law for scaring victims of violence into silence: “To all of these Latinas out there, know this: You are not alone. We are standing with you.”