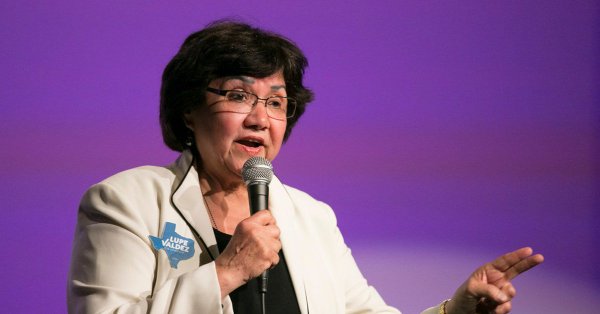 “This weekend, I fell short,” the former Dallas County sheriff said Monday in a prepared statement. “A young woman asked me a question at a forum over the weekend regarding my track record, and she did not get the answer she deserved. I am sorry, and I understand why people are disappointed.”

The nearly 700-word statement comes as potential voters and left-leaning advocates have pressured Valdez to explain why she cooperated with immigration authorities’ requests to hold people in her office’s custody.

Karla Quiñones, the W.T. White student from Dallas who questioned Valdez, released a statement Tuesday on behalf of Jolt, a group focused on mobilizing Latinos to vote that organized the forum Sunday.

“We appreciate Lupe Valdez’ statement, but there are still many questions that need to be answered about the policies that she implemented as Dallas County sheriff,” Quiñones said. “The policies that Valdez adopted allowed ICE to have access to jails she oversaw, and led to the deportation and separation of immigrant families across Dallas.”

During the exchange with Quiñones, Valdez said she supported immigration reform and a path to citizenship but did not address questions about her office’s compliance with ICE detention orders.

After representatives from Jolt expressed dissatisfaction with her response, they endorsed her opponent in the May 22 Democratic runoff, Andrew White, who criticized Valdez for not directly answering the question.

“We had the same thought Karla had, which is, she still hasn’t answered the question,” Desi Canela, a spokeswoman for White’s campaign said in an email. “That’s what’s led Texas immigration activists to ask: Whose side is she on? She voluntarily complied with ICE, and voters like Karla want to know why, and rightfully so. Maybe this is why Lupe won’t debate.”

White has repeatedly pushed for a debate with Valdez, who has said she is open to it but her staff will handle the details.

Quiñones, a member of the group’s endorsement committee, added: “We think that one of the best ways for her to address all outstanding questions is by debating her opponent Andrew White. Texans deserve to hear from both of them.”

In her statement Monday, Valdez said the country has a “broken immigration system” that too often results in immigrants and other vulnerable communities being used as bargaining chips. The divide between immigration hawks at the federal and state level, she said, puts local officials in a no-win situation.

“Federal and state officials are pressuring local law enforcement to follow policies that rip families apart. Local law enforcement is often torn between repairing trust with communities they serve and jeopardizing public safety funding that state and federal officials hold hostage to get their way,” Valdez said. “That’s not how government should work.”

Noting that she remained “steadfast” in her call for immigration reform and building trust with immigrant communities, Valdez touted her opposition to the state’s sanctuary cities ban and said she had been on the front lines in opposing the law.

Valdez said she would continue outreach to immigrant communities as governor and fight “cruel policies like SB 4 [the sanctuary cities ban] — a policy based on fear that only serves to tear our communities apart.”

John Wittman, a spokesman for Gov. Greg Abbott’s campaign, said in a statement Tuesday: “This is not the first time Sheriff Valdez has made clear her intention to eviscerate Texas’ ban on sanctuary cities and it won’t be the last. This November, voters will have a choice over whether they want to turn Texas into a sanctuary state in the mold of California or uphold the Rule of Law and keep Texas the model for the rest of the nation.”

Valdez said in her statement that Abbott had “directly threatened” to cut her department’s funding because she had proposed changes to how the sheriff’s office complied with requests from immigration authorities.

“While I was sheriff of Dallas County, I complied with detainers or else we could have risked funding for a range of resources, including drug courts, juvenile justice programs, and body cameras,” Valdez said. “I didn’t have the ability to change federal or state policy, and Governor Abbott got his way.

“I wish we could have done more, and that is why I am such an outspoken advocate for comprehensive immigration reform with a pathway to citizenship,” she continued. “I have stood side-by-side with immigrant communities and fought against cruel and shameful policies. I have done what I believed to be possible. I have been fighting for years, and I am not stopping now.”

As a daughter of immigrants, Valdez said she understands the distrust between the community and law enforcement. She added that during her law enforcement career, she’s proved to be “tough, but compassionate.” She said standing up for immigrant communities and ensuring they did not suffer the “cruel and inhumane” treatment her family had experienced was a staple of her life.

“I have lived it, and it is my goal to make sure that young Texans don’t face that same treatment I witnessed years ago,” she said.

Defending her record as sheriff, Valdez said she pushed for policies to ease detentions for minor offenses. She said she declined to designate local officers as immigration authorities under federal partnerships, known as 287(g) programs, and encouraged law enforcement officials to end nonessential collaboration with immigration authorities.