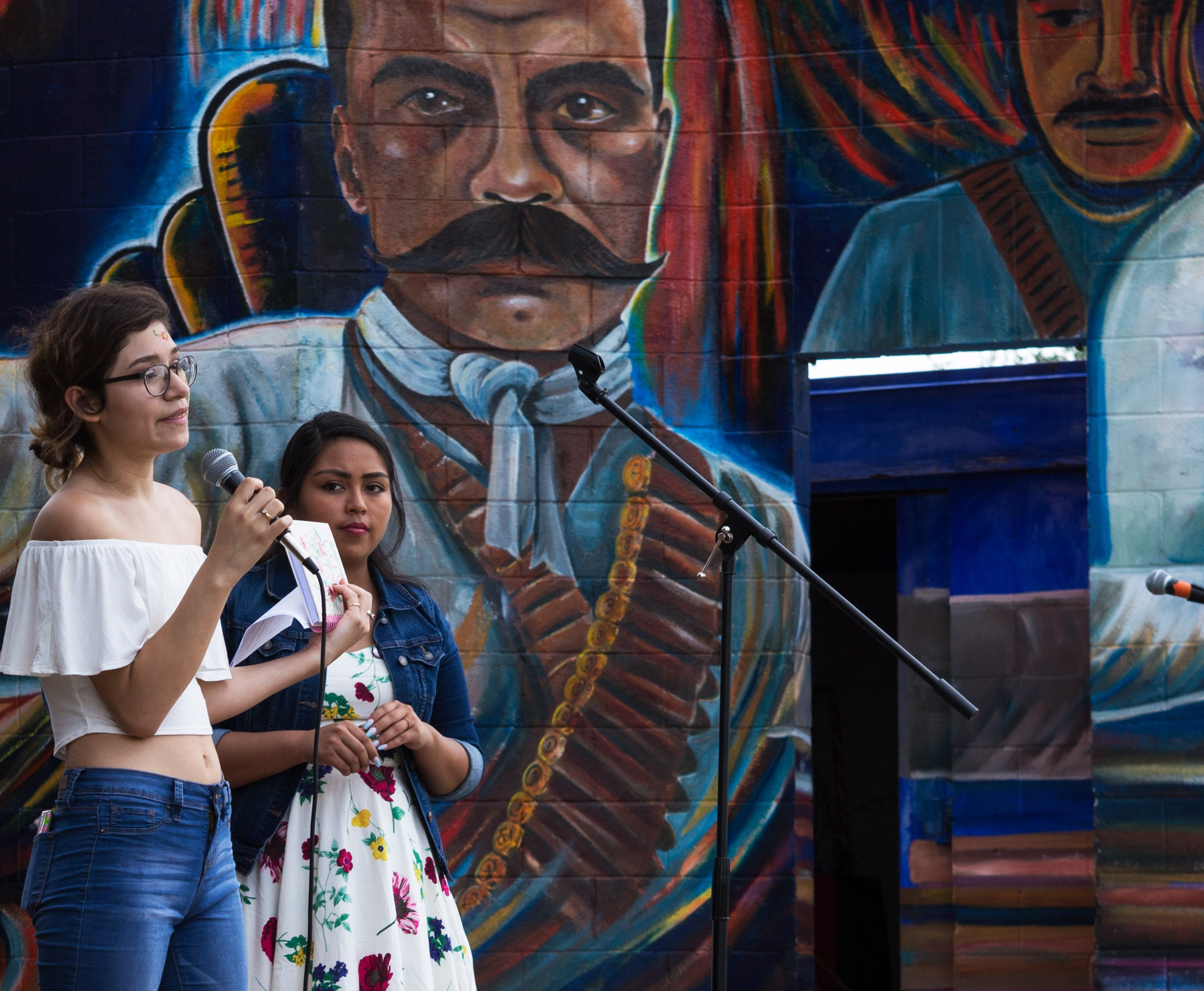 “Change requires real organizing and investment in the community. You have to be committed long-term to Texas.”

On a sunny April afternoon, Maggie Juarez, 17, took the stage in an East Austin park in front of a large mural depicting historical figures of Mexican resistance, including Emiliano Zapata and César Chávez. She told a crowd of around 50 about the day she walked out of class to protest Trump’s immigration raids in Austin.

“I walked out because my community was being attacked,” said Juarez, who took part in an immigrant strike and march in February — her first protest. “We marched; now it’s time to organize and register our community to vote.”

As she spoke, vendors sold paletas and cups of fruta con chamoy while volunteers ran a voter registration table as part of what organizers billed as a “resistencia fest.”

Jolt is the brainchild of Cristina Tzintzun, a longtime organizer and founder of the Workers Defense Project, a nonprofit that energized the moribund labor movement in Texas by finding creative ways to organize immigrants. Tzintzun left Workers Defense Project in 2015 and worked briefly in Washington, D.C., before moving back to Texas in November.

“Jolt is the organization that’s building the movement of Latinos that will change Texas politics forever,” Tzintzun told me in the group’s tiny office in East Austin. Eventually, she said she hopes to see the nonprofit “in all five metro areas, registering tens of thousands of voters and mobilizing hundreds of thousands during the election cycle.”

Since Tzintzun launched the group just after Trump’s election, it’s trained 200 volunteers, founded a University of Texas at Austin student chapter, built a contact list of 15,000 people and is planning an organizing institute for “the next generation of community leaders.” The group’s first-year budget is $430,000.

The idea, Tzintzun said, is to build a long-term strategy centered on empowering Latino youth like Juarez. More than a third of the state’s nearly 11 million Latinos are under the age of 18.

“Some people look at Texas’ Latino population and say Texas will quickly turn blue, but I don’t believe demographics are destiny,” she said. “It requires real organizing and investment in the community. You have to be committed long-term to Texas.”

Such talk might sound familiar to close observers of Texas politics. In 2013, Battleground Texas blew into the state promising to use grassroots organizing and voter turnout methods to make Texas competitive for Democrats again. The group, headed by Obama campaign veteran Jeremy Bird, said it would capitalize on demographic change in Texas and help mobilize an Obama-style electorate of young people, African Americans, Latinos, women and other groups who often have low turnout in Texas.

But Battleground Texas disappointed many when it became the de facto campaign vehicle for Wendy Davis, who lost the governor’s race to Greg Abbott in 2014 by a stunning 20 percentage points. Many criticized Battleground for relying on out-of-state organizers, poorly trained volunteers and ham-handed attempts at outreach to Latinos.

Tzintzun didn’t mention Battleground Texas by name, but she draws a contrast between Jolt and other groups.

“There’s been different attempts from folks that had the best intentions but weren’t committed long-term to Texas,” she said. “And [they] also didn’t come from the Latino community and understand its culture, its opportunities and its challenges.”

Tzintzun said she chose to launch in a non-election year for a reason: to build trust and support around issues long before asking Latino voters to turn out for a specific candidate. All three of Jolt’s staff are Latinas.

Over her 12 years, Tzintzun grew the Workers’ Defense Project, a group that organizes undocumented workers, from a small, volunteer affair to a $2 million organization with a national profile.

“I built Workers’ Defense Project when I was 24 years old and didn’t know what I was doing from a paid staff of one to a staff of 25,” said Tzintzun. “So I know we can do this.”

At April’s “resistencia fest,” I sat with Juarez at a picnic table as she told me about her entry into activism.

The day she walked out of school, Juarez said she caught a ride with a friend to the march downtown. When the group reached the Capitol, she felt inspired and asked Tzintzun, whom she’d never met, for her megaphone so she could give a speech. It was time for the march to return downtown, so Tzintzun suggested she lead them back instead. Juarez took the megaphone, and the crowd followed.