This is a single blog caption
08
Jun 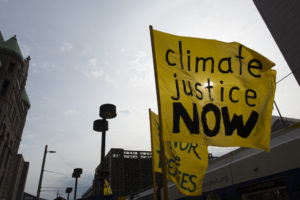 In December of 2015, representatives from 196 nations made history with the Paris climate accord, the first united global effort to fight the threat of climate change. Thanks to this pact, worldwide progress on environmental protection wasn’t theoretical anymore: the agreement committed nations to holding temperatures “well below two degrees Celsius above pre-industrial levels,” and called for each country to make an individualized pledge to reduce its carbon footprint. For the United States, this pledge included a promise to reduce greenhouse gases 26 to 28 percent by 2025. Although the Paris accord had important concrete implications for reducing carbon emissions, its symbolic impact was even more groundbreaking. It sent a strong message that the world’s nations were serious about fighting against climate change, and it created powerful momentum for building a cleaner future.

This past Thursday, President Trump jeopardized this momentum when he officially withdrew the U.S. from the Paris climate accord. Any way you look at it, this was an incredibly harmful move. It’s bad for employment: clean energy jobs are growing 12 times faster than the overall economy. It’s harmful to the U.S.’ foreign relations: it communicates to the world that our country refuses to collaborate on environmental progress. It’s dangerous for our people’s health and safety and will threaten the cleanliness of our air and water.

Although this action will have enormous negative repercussions across the country and the globe, we must recognize that not all communities will bear this burden equally. Trump’s move to exit the Paris accord will disproportionately affect people of color and poor people, and thus will be a major roadblock in the fight for the safety and justice of the Latino community.

According to the Natural Resources Defense Council, the nation’s 56 million Latinos are “Ground Zero for climate impacts.” Nearly 25 million Latinos live in the 15 most dangerous areas for ground-level ozone pollution, and the majority live in states that are most affected by extreme heat, air pollution and flooding. Latinos are over represented in construction and agricultural work, industries in which workers are at high risk from extreme heat. Latinos generally have lower health insurance coverage rates than non-Latinos, so they are much more vulnerable to climate-related health problems. The 11 million Latinos who are undocumented in the US are most at risk: they are not eligible for disaster aid in the case of extreme weather damages to property, and they have very restricted access to healthcare and insurance. These dangerous repercussions of exiting the agreement are daunting in this Trump era in which the rights and safety of Latino people are always under attack.

Although the Latino community bears a disproportionate burden of climate change, it also possesses incredible strength in the fight for environmental justice. Latinos have the most to gain from a clean future: nine in ten Latinos want climate action and 86 percent support carbon pollution limits on power plants. Members of the Latino community — from our representatives in Congress to grassroots organizers — have already played a crucial role in the climate justice movement. Our environment’s health is deeply tied to justice for Latino people, and the potential future strength of our community in organizing around climate justice is enormous.

Trump’s move to exit the Paris climate accord marks another way in which his administration endangers the lives of Latinos; it must serve as momentum to continue harnessing the power of our community in the fight for a cleaner and safer future.